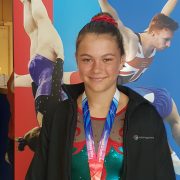 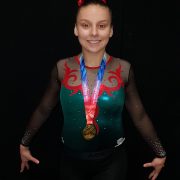 It was certainly a great relief when both Alisha Evanson and Amy Buckle both took Great Britain titles at the National Development Plan Finals in Coventry in July. An amazing set of tumbles for both girls with high scores winning on the day.

Amy had only just come back from a cruise and had a session or two to get familiarised again with her tumbles before she was put right back in the hot seat and performed her best yet for the club. A very relived Amy was happy to grab the Gold after fighting up from 3rd through to 1st on her very last tumble, amazing!

Alisha Evanson had only just won her recent English title back in May and came to this event in a strong position and didn’t disappoint as she went ahead and won all three runs taking the highest score in each. Nearly a whole two marks ahead of the field with high tariff tumbles she nailed every one to take the Gold from her fellow competitors from some of the strongest clubs in the UK.

Emily Ebbage came a respectable 4th and Jasmine Evanson also good performances to gain 7th overall in the Womens Tumbling level 2 and level 5 respectively. Not quite what they hoped for but they will work hard to have another go at a later date we are sure, well done for getting to the national finals. Mathieu Southern in grade 3 mens Trampolining came a great 5th place with it being his first national competition, well done for keeping his cool and performing well with Coach Craig Walker happy to see such a good result too.

Mark Hudson, Tumbling Coach, was extremely pleased at these early days of the squad to reach all the targets set and now was confident about the next stage of development into elite pathways although he knew it would take some time, maybe years to get to the top of that very competitive level.

The club has two English and British Champions now after a year of operating in our new facility at Moss Farm, roll on the next five years and to the continued successes.

Want to join the discussion?
Feel free to contribute!

This site uses Akismet to reduce spam. Learn how your comment data is processed.