You are here: Home1 / News2 / News3 / Trampolinists Narrowly Miss Out on National Titles 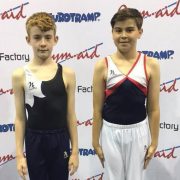 Our trampolinists Ryan Campbell (left) and Lucas Adams have been competing at the National Development Finals in Nottingham over the weekend. Ryan competed well and missed out and a Gold medal by just 0.1 of a point to gain the silver medal at Level 3 in the 13+yrs category, well done!

Lucas was leading after his voluntary routine but had an unlucky fall after a simple element which put him out of contention but has great potential for next time. Well done to them both, great advocates for the club and a big thank you to Loren Hall who coached them all the way.

Want to join the discussion?
Feel free to contribute!

This site uses Akismet to reduce spam. Learn how your comment data is processed.

British Gymnastics Story on our Club
Scroll to top